Today, Wednesday, was a challenging day for Tenderfoot.  Little Man discovered the stapler and spent a long time making stapled K’s.  Tenderfoot was drawing running forms on the chalkboard and finding them very hard.  Lots of “I can’t do this” and erasing.  She was clearly frustrated.  We switched to paper and crayon, and she did a few rows of the form . . . .”Look I can’t do it!!” as she worked . . .. when she finished she stood back and counted the exact places (3) that she had made the shape ‘perfectly’!! 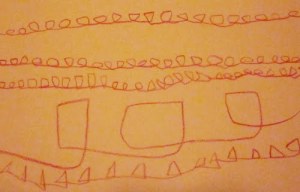 Then she wanted to try another one, so we did some line forms, which I call ziggurats.  She continued to complain as she worked about how hard these were and then, “Can’t we do numbers instead?” . . . she happens to be very quick and adept at number related work :0)  So the complaint changed to a push for number work and much sulking.  We took a break after she had made two sheets of ‘ziggurats’ to her satisfaction.  She drew lines around the outsides to show me how crooked they were.

After our break we recapped the story along with Urdu words and switched to where on the zameen at the edge of the samandar, in the direction the little kashtee was headed, lived a woman.  Here I figured I would honor her request for numbers and change focus, so introduced Pickle Place Math as posted up by Marsha Johnson on the Waldorf Homeschooler’s yahoogroups site.  The woman became the lady farmer growing cucumbers to make pickles with.  We played with ones and tens places and Tenderfoot seemed a lot happier for it.  Little Man was busy counting number son his fingers and we drew pictures of the pickles in their jars before ending with our lessons.  Later in the afternoon, we sliced up cucumbers, poured cider vinegar over them, the girls brought in cilantro and dill seed from the garden to add, and we made quick pickles . . .

On Thursday, we began the day making salt dough with Tenderfoot, who measured and mixed it all up.  Here is the recipe:

First we dissolved the salt in the water on the stovetop.  Then we added the cream of tartar and oil.  Added the flour and mixed it up.  Let it cool down, then we emptied it onto a lightly floured counter and added the essential oil.  Knead till smooth.  Store it in a glass container when not in use :0)

Tenderfoot made the ocean with an island in the middle with some of it. She made a few boats too and some people.  Then Little Bird and Stormy came along and began playing, so Tenderfoot switched to a review of the Urdu words in the story.  Little Man was outside helping carry tools back and forth with Steve, our brother, who is painting the siding sunflower yellow.  Indoors we did more number work, focusing on subtraction in the upstairs downstairs form, with borrowing from the tens place as needed, answers in the cellar.  Working on those ‘places’.  Went horse riding after lunch and came back to some embroidery with Tenderfoot and Stormy.  Little Man is deeply occupied with the stapler and all that he can do with it . . . .create envelopes stuffed with assorted items from around the house, which he wants us to mail to cousins for him.