Skip to content
Had a really romping opening time!  Everyone was ready to stretch, twirl, sing, clap, and count for a bean bag toss.  We took a nice long beginning to warm us up into Tenderfoot working on those forms from earlier in the week.  She fussed some but then I joined her in a dance with the form . . .. over, curve, across, back down . . .with full body movement and she enjoyed it immensely, and the outcome was to her liking!!  So we must dance out the forms, yaay :0) 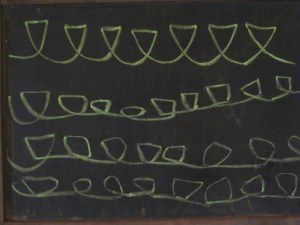 Little Man had forgotten what a K looks like already, so he worked on K’s in his handwriting book and sang a little ditty, “Making K’s to make a key to give the king for his kitchen door to open . . . .” and then made them with salt dough, cut out with a pizza cutter from a round, after which he rolled snakes to join up as K’s.  Let’s see if he can remember what a K is in two days :0)  Stormy played with the dough and then it was time for a snack and some fresh air, after which we went on a walk and never did come back to lessons . . . .I’m finding it challenging to direct/lead things consistently toward one goal constantly.  But the form drawing dance was the highlight of my day, felt like inspiration flowed and got us unstuck, so if every day has a moment like that, wonderful!!  I’m optimistic :0)

Toward late afternoon I was overheard talking with family about the flooding in Pakistan, which has me somewhat speechless on many levels.  It is where I was raised and what nurtured and shaped me for the first nineteen years of my life.  That’s where I’m coming from.  The sound of the drums course through me still and the sights, I cannot begin to describe the sights of my childhood for I cannot seperate them piecemeal . …. they are one enormous tapestry filled with people in all kinds of different dress, all colors of the rainbow, all fabrics woven up together in a hustling bustling market of beggars, every age and configuration possible . .. one legged, no legged on a wagon pushing himself with his hands, toothless nursing mamas with babies on their bosom, blind men led by young boys . . . young girls selling combs, rose garlands, verses from the Quran, or young boys wanting to wipe your windshield with dirty rags . . . and then the street vendors with roasted chickpeas, mountains of peeled pomegranates on carts, poatato cake sellers, the bicycle man with his ice sticks dipped in whatever color syrup to sweeten . …coconut trees, angry waves crashing over rocks, sea spray and the miracle dolphins and turtles that bring back people from the dead, herds of buffalo crossing the streets holding up traffic, rickshaws, donkey carts, families of 8 riding one motorcycle, families of 6 on one bicycle, the ‘yellow devil’ public buses running at top speed carrying people on the roof and many hanging off the ladders and out the doors, oh my goodness!!!  How I miss it all and now it’s drowning while the skies weep and pour out more water than has a place to go, yet the people are dying of thirst for amidst all this water none is potable and is infact deadly!!!!  My sister’s garden=under a foot of water.  Dunned in by the water!!

So out of this came an interesting ‘lesson’ with the children as they wanted to know what is a flood?  What if the creek by our house floods?  How are people being taken up in helicopters?  What about the chickens?  Is there any way we could drink that water and make it clean?  Could we get on a log and go downstream instead of waiting for helicopters?  How could we get off an island if we found ourselves marooned suddenly?  Were people dying?  What was going to happen to them?  How many people fit on a helicopter?  Where will they go?   And so on it went, with the answers being explored mainly between Little Man and Tenderfoot and me as a fulcrum to look at when in doubt.  It captured their attention and seemed to click in with the island and boat ride from the week’s story.  Left me feeling emotionally seesawed between floods and K’s and all the other daily activities seeming suddenly disproportionate to possible realities. 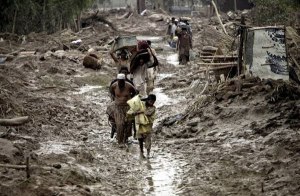