It’s forgotten how to rain around here.  The day started out cloudy and grew darker, then a few drops fell.  After over a month of sunny blue skies, dried up fields, crispy crunchy leaves everywhere, and the creek down to the rocks we were all quite ready for a wet day.  But just a few drops fell.  The clouds seemed not to know how to open up and release themselves.  They just lingered and drifted until the winds blew them away, and by evening it was blue skies fading to reds above the trees, then darkness and all the stars and the moon out dancing.  Silven.  Sylvan.  It’s forgotten how to rain.  In the meantime we’ll build rock walls and towers and people in the creek, and gather goldenrod to tincture. 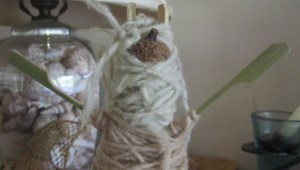 We got a few bags full of baa baa black, white, and grey sheep, llama, and rabbits wool.  Some carded, some spun yarn, roving, some cotton too.  Even a few hand spindles and patterns for dolls, animals, puppets, goblins, gnomes . .. a veritable treasure trove of warmth.  From the studio of a local lady who spun and wove for the last forty years, a waldorf kindergardten teacher in a past life.  Lots of love in these bags we got.
This morning woke up to find the children were up and busy at work making dolls with ice cream sticks and wine corks and and acorns and lots of wool.  They did this from 6:30 till about 9:30, by which time some of the dolls had bags made of paper and gowns of cloth with ribbons in their hair.  After this they were ready to eat breakfast, which as Tenderfoot remarked, Wow we’re eating breakfast so late today!

Afterward we colored the picture to this past weeks’ story in which the Wisewoman, Prince Broadwing, and Blossom have met the Badshah Salaamat and restored his Queen to him by chance, in the form of the dove from The Magic Oranges which Broadwing shot in the wing and gifted to Badshah.  I adapted the story a bit and placed it in India during the reign of Shah Jahan, so the Badshah was modelled on him along with the Taj Mahal as the basis for the castle.  Lots of ooh’s and aah’s at the marble palace with cutwork windows hewn out of the marble itself, while we criss crossed and played with our fingers to see how that might look.  It ended with a huge fiery orange celebration . . . . fire eaters, fiery hula hoop jumpers, fiery arrows shot at oranges that exploded with showers of gold or orange blossom flowers filling the air with sweet smells, and many exclamations of ooh, and aaah, and even eee!!   Added to the Urdu vocabulary during the conversations between the Badshah and the Wisewoman.

Have found the weekly story to be a great conduit for setting the stage of other times and places.  For instance we did The Goose Girl, which was in a Germanic village where there was a lot of cobblestones and cheese and fresh baked bread prevalent.  The trio encountered all these culinary aspects through their stay at the inn and a visit with the pickle lady , who is up to her ears with barrels and barrels of hundreds of pickles . . . each barrel holds a hundred . . .. and many jars with tens of pickles . . . each jar holds either ten or one enormous pickle taking up the same space as ten . . . and one lone jar with five pickles.  She’s thinking of selling barrels to the inns, the ones jar for samples and the tens jars for sale at market.  We also encountered the villagers in loongis and turbans, bearing sticks, outside the Badshah’s castle chasing off a camel and a jackal eating out of the sugarcane fields and got to hear the story of the two creatures while Blossom and Broadwing wondered at what they were seeing, hmm maybe this is what happened . . .. . it’s quite a lot of fun :0)