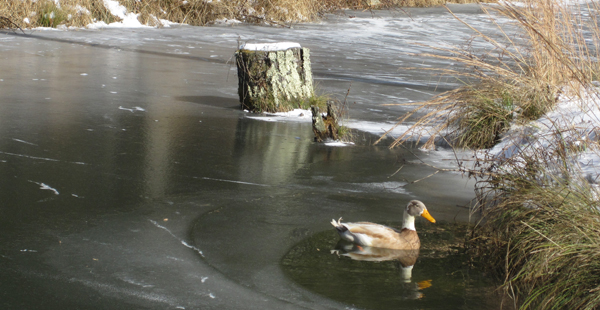 i don’t know the ‘degrees’ of temperature outside, but it is frigid to say the least.  fingers go numb in warm gloves, pant legs become instantly crisp and starched -onto-my legs feeling, eyelashes tingle, nose stiff and somehow drippy, and the rest of me unbelievably thankful for the ultra warm jacket and snow boots that keep me from full body freeze!!  i take boiling water out every morning to thaw the chickens waterer with, and what should i find today?  the duck has found refuge under the coop, as what was left of the pond is now frozen over too.  tenderfoot thinks he stays out of the coop because it might be too hot for him in it, being a duck and being used to outside and all :0)  we’re curious to see if he makes it through the winter.  he had a brother who disappeared overnight . . . .  could have been owl? coyote?  that was in midsummer and the pond still a haven.  what now with it’s surface solid? . . . maybe we can ice skate on it if this cold keeps up!

and on one of these cold days, what should i miss but a bear chase right in our potato patch.  everyone saw it but me, i wasn’t home.  see what happens while i’m gone . . . .  a bear comes crashing out of the woods, down the slope we sled on, across the potato patch, over the creek, and up the slope into the woods on the other side.  in pursuit are six dogs that come barking out of the woods.  apparently after the bear sighting everyone went outside asap, so they were there before the dogs came.  the dogs may have been thrown off by the poultry and people running about the place, because it took them a while to leave.  they circled the pond, sniffed at the bears tracks, ate out of the compost, and wandered about before finally leaving.  they were all wearing collars with antenna hanging off them.  here’s the question i had:  if the dogs had tree’d the bear on our property, would the hunter show up?  and could we deny him the bear since our land’s posted and we haven’t given anyone permission to hunt anything yet??  as it was, the dogs left and the bear was long gone by the time i returned.  nobody heard gun shots, so maybe he’ll get to eat more blackberries next summer.