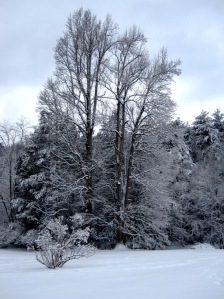 we had our third snowfall.  it started out as sleet, then hail and sleet.  the trees all had coatings of ice before snow added itself to the mix.  finally it just snowed, heavy wet snow, sticking to everything.  it was breathtaking.  still is.  by evening we had lost power.  laughing fox and i played snowstorm by candlelight.  on our  way to bed we looked out the window.  there was a bright blue glow down the driveway.  blue lights flashed a few times.  the trees were all luminescent, the snow reflecting back the lights triplefold.  we wondered, what was it????  then the lights began moving toward us.  it was spooky, slow, and very surreal!  suddenly a truck emerged from the white glow; a man jumped out encased in some kind of snowsuit with goggles.  it was huey, from the electric company, armed with a chainsaw to remove trees that had fallen on the power lines.  his truck had chains on the tires.  we marvelled that he made it up our driveway, which our all wheel drive subaru won’t traverse.  before long we heard the zzzzzZZZ of the chainsaw and a while later the electricity was back.  all by the witching hour.  i was a bit sad:  i was caught up in the daydream of what the lights could have been and had warmed up to it being other worldly beings come to us on a quest of some sort :0)  oh well, so we have power and lots and lots of snow to enjoy.  i am thankful.