having first explored combinations of branches in hobjolia (where the grobjos were learning how the trees’ branches added up, telling them the secret of the number inside that tree), we’ve left the trees to the grobjos to tend.  tenderfoot can easily keep going past twelve, which is where we left off in hobjolia.  she’s since explored the combinations of numbers that can be added to give sum totals of one through twelve and beyond on paper without the trees (like 5 + 3 + 2 +1 +1 = 12).  we have switched to multiplication facts, no trees ( i like to do addition and multiplication close together, as they are interconnected).

she’d been reading a book on electricity and batteries, so inspired by the image of power on a line, we made up a lesson together that takes the multiplication table values from one place to the next on a string.  it took some doing to figure out and was a bit complicated at first!!

we cut out cards and wrote the values for all the times tables, 2 through 9, on each card.  we’re going through them sequentially, so next tenderfoot strung up the two times table on what is the line, which will carry messages on it along with the numbers. this is her translation of how she understands our internet connection to work:  we get it through the electric line, it carries messages back and forth, and there’s numbers involved, so.

then we talked about the message and came up with this:  to send a message, first the values have to be added together.  the sum total is how many letters the message must have.  she set to work adding up all the numbers and was amazed that it was in the hundreds.  equally amazing was counting letters and writing.  it was challenging but she happily declared it was one letter too short and changed Bill to Billy to correct that :0)  then the message got strung up.  she’s going to use the three times telegraph to send Billy’s reply to herself, which had her in giggles.  we go over the times tables that she’s worked on daily using claps and jumps and impromptu songs to reinforce the recollection of these values.  there’s something to be said (at least i believe so :0) for memorization or ‘rote learning’, as it is sometimes called.  now there’s even more to be said for memorization that comes after the subject matter has been thoroughly chewed on and digested!  between and betwixt the two there can be a world of a difference . . . . 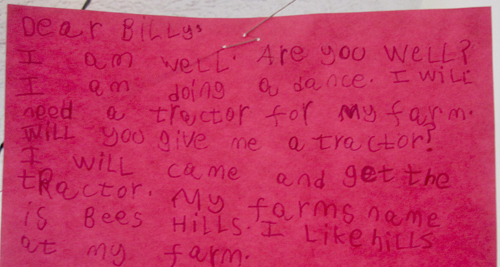 One thought on “multiplication on a string”