I used the Mother Holle tale to come up with a lesson block that is intended for exploring the relationship between numbers.  Our family is well acquainted with the fairy tale, so I modified it for the lesson to suit my purpose.  The outer work done by the sisters is reflected by having four loaves in the oven, forty apples on the tree, and four pails of milk filled, in order to come up with a total of forty eight to work with.

In the house, the first sister, Rose, helps Mother Holle pack up her four winter blankets, shaking them out and putting them away into four chests.  Each blanket drops one feather, which she picks up as a keepsake.  The inner work adds up to twelve to work with, which four times is the earlier sum of forty eight.  The second sister, Blanche, comes along after winter’s over and spring is beginning, so her inner work at Mother Holle’s homestead involves hoeing up four garden beds, seeding the four beds, and dusting, sweeping, and mopping four rooms for the same result of twelve.

Told the story with the numerical details added, and the children all picked up on this right away!  Used playdough to make the props . . . .  Tenderfoot made the oven and pails, Stormy made the apples, Little Man made the tree, and Little Bird made the loaves.  Did some walking and hopping in two’s.

Recapped the story and did some form drawing:  Mother Holle’s lower and upper  teeth. 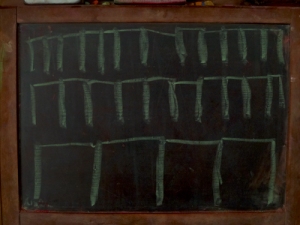 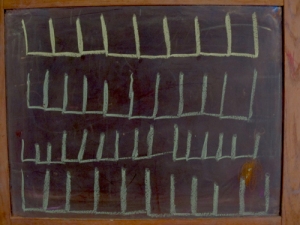 Little Man objected to her teeth being so straight and even, as he opened his mouth wide to show me how there are differently shaped and sized teeth.  Stormy counted out each row of teeth, and Tenderfoot counted them later in two’s, four’s sixes, and so on, pointing out how they look like E’s, M’s, and W’s, depending on how you look at them.   She also laid out the apples in ten rows of two, declared that she had twenty left over, and played around with two: two legs on the chickens, two eyes, two ears, and so on.

Began working with four right away, by laying out the apples in fours: look mom, ten rows of four is all the apples instead of half of them like when I laid them out in two’s yesterday!  Indeed.  Then she pointed out that many animals have four legs, and so do the tables, chairs, and benches, there were four seasons, paper has four sides, and the cars have four wheels.  We proceeded to split forty eight into half, into quarters, and three quarters.  Then we explored how you might get the same result from two, as in if forty eight is twelve fours, then how many two’s is it?  Looked to see how twenty four could be half of forty eight, as well as twelve twos, and six fours.  Kept exploring numerical possibilities in multiples of two and four, moving along to the chalkboard for addition as needed.  Outside, we played hopscotch using two’s and four’s to make the pathway.

Spent the last day of the lesson block going through the four and two times tables and making pictures.  Stormy and Little Bird painted, while Tenderfoot colored Rose shaking out a blanket by four chests, four feathers fluttering about.  All in all it was a fun lesson block with more avenues to explore through numbers and teeth than I had thought of  :0) 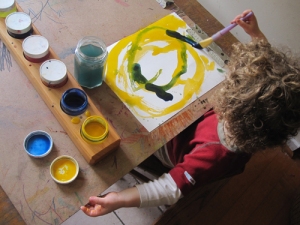