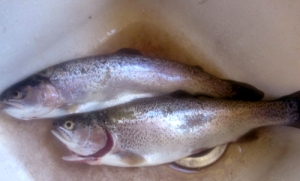 woke up this morning and found a headless, legless henny by the rain barrel . . . . presumably a raccoon dunned her in, and obviously she missed the nightly coop lock up.  so we took her down the mountain for a burial and en route stopped for a call to nature by the river.  inspired by the water, rocks, and sparkles, i thought, “let’s go  fishing today”.  the kids were thrilled.  so after lunch we set off . . . .

. . . .  up the mountain to a general store that has a trout stocked pond and fishing supplies; a good starting point.  bought a rod, bobber, weights, hooks, and mealy worms.  christy, the cowgirl with honey hair that falls like a sheet, a thick sheet of satin, down past her butt, showed us how to set all these up and then pointed us to the pond. across the road we went with rod and bucket.  and try as we did to swing the line out like christy, we just got tangles.  so we moved to a new spot and the kids said, “mum you figure this out while we go talk with christy and mr. canton”, and ran off before i could blink!

there i was, trying to figure this fishing thing out, when canton came around with the kids and gave us a lesson :0)  he showed us how to throw the line, reel it in to keep it slightly taut, watch for a bite on the bobber, hook the fish, and bring it in to shore, where he broke its neck from inside its mouth.  then i took a turn and whoot whoot, i caught one too and golly, it was pulling the line away from me as fast as i could reel it in!!  the kids were all jumping and yelling and finally i got it banked.  then it jumped around and slid while i tried to break its neck.  i got it done, but it took a bit of doing!  canton left us after this and we all took turns fishing.

it’s not as easy as it looks, but once a fish bites and it’s on the hook, wow, you just know its there.  tenderfoot and little man each caught one, eyes big and round with excitement.  when we were done, canton showed us how to clean one, and we brought the rest home where i finished up with tenderfoot.  she was adamant to clean one herself, the whole thing mum, so she did.  now they’re in the oven, stuffed with fresh oregano, mint, garlic, lemon juice, and dried coconut, broiling for supper : 0)