Today I planted onions and harvested marshmallow roots (only way to describe the taste is earthy and mellow) and rhubarb all alone.  The children have been stuffed up over the past four days . . . with the exception of Girl, who pretends during the course of the day that she too is stuffy and changes into her nightie to go and rest before emerging full dressed in day clothes to go and check eggs since she’s ‘well’.  The other three have taken to their rooms, where they are plied with wildweed broth, rosehip ‘jam’, marshmallow roots, violet paste, napkins, and Asterix comic books.  The season is abundant with healing foods, so I’ve been busy infusing, cooking, decocting, and wildcrafting, between feeding and reading The Book of Three to the children.

There is so much one can do with plants.  I’ve been working with a few of these recently: namely chickweed, burdock, comfrey, dandelion, and nettles.  A few things that I’ve been doing with them, in addition to nibbling on chickweed, violets, and cleavers while on walks  . . . .

The dandy-lion leaves have been sauteed in oilve oil with garlic and a splash of balsamic.  I like it even more with burdock leaves mixed in, young smallish burdock  leaves.  The children eat these with mincing expressions and exclamations about how ‘sour’ it is . . . . interesting that they find it sour rather than bitter even without the balsamic.  I like the bitter and find the undertone sweetish myself.

I gathered some baskets together and returned with chickweed, coltsfoot leaves, nettle tops, garlic mustard, and violets.  Everything except the violets went into a pot with dried astragalus root slices, minced garlic, one chopped onion, and a few handsful of chopped lovage.  Filled the pot with water and cooked it into a wildweed soup, which was salted and had beaten eggs stirred into it.  With amino acids, it is extremely tasty and it’s yummy without any too.  We’re still eating this as I made quite a bit.

The violets, leaves and flowers, went into a small grinder with water to cover and a bit of lemon juice, then whizzaway until it became a paste.  I added honey to this and it is deliciously refreshing . . .  the raw flowers have a spicy bite to them that I always feel in my throat, a good kind of bite, and the purple flowers, while smaller, seem more potent to taste than the white; we all enjoy a teaspoon or two during the day.

Another thing I’ve been doing with the burdock leaves, chickweed, and dandelion flowers is wilting them overnight on a screen then putting them into their own jars.  Warm olive oil is poured over top, till just about to the rim, and they’re sleeping for six weeks in the dark, after which they’ll be strained, splashed with brandy, and stored to make into salves, balms, creams, etc.  Have done the same with comfrey leaves, and I may try it with the nettles too.  I particularly enjoy using dandelion oil on my aching hands after a day of weeding, digging, and planting.  Feels sooooo good! 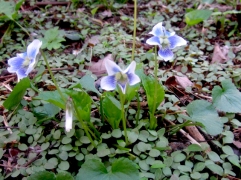