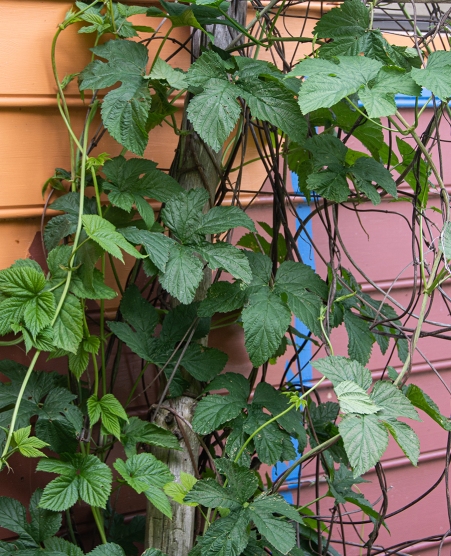 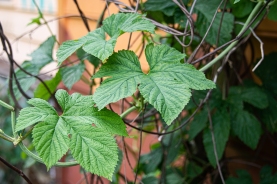 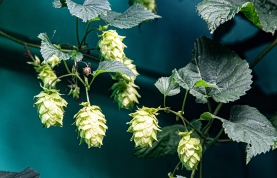 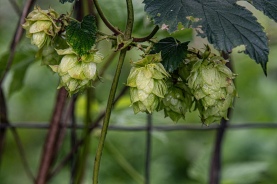 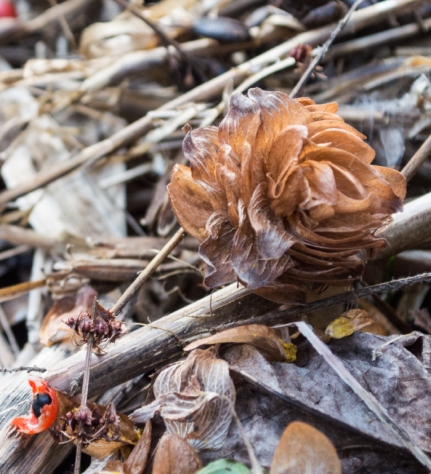 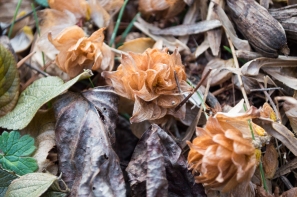 The plant, in my experience, holds on tenaciously both at the root level and the climbing bine level . . . one can go on pulling and digging at the roots and shoots and they keep going, regrowing even from the smallest bit left behind and out of the compost heap as well.  Once planted it is tenacious and near impossible to push back, contain, or get rid of. Reflective of the personality who just won’t let go . . .

Hops sends out long fingers, wrapping around whatever they encounter and even dipping down to earth and rooting to leap around in the garden. Hops has taught me to be incredibly careful when discovering plants around old, abandoned homesteads, which is how it came to be in my garden where it is now near impossible to remove, and casts shade once it’s formed a thicket of leaves on the fencing that it has happily covered. I keep it as thinned as possible, even giving away transplantable shoots to forewarned folks who want to grow some, which makes for better Hops yet it still spreads from place to place no matter how many roots are pulled and shoots are eaten . . . and on the matter of shoots, they are well worth having  as they are utterly delicious sauteed in a herby garlic butter, tossed with grilled tofu or blackened chicken, and a chunk of sourdough bread to go with, yumm! It’s no wonder hops was a common ‘pot herb’, akin to asparagus and way easier to grow, since it happily spreads all over the place unaided.

To me it smells strongly of marijuana when it’s ‘blooming’, which is how I found it by way of my nose leading a bushwhack to its location.  When it’s ready to harvest, it leaves a powdery residue on the fingers when pinched and has a strong scent.  It is best tinctured right away at this point, or immediately dried.  I have heard it keeps better refrigerated after drying; I store mine in a jar and have found it to be effective.

The infusion does not knock me out the way either skullcap or valerian tincture does, nor does it come accompanied with racing heart or surges of panic but induces a state of calm that I don’t feel in my limbs, just gets straight to the calm. It tastes very bitter and begins its work by first releasing trapped up gases that I am often unaware of until emitting a few burps and farts.

I prefer the infusion of dry strobiles over the tincture, finding their lovely papery layers reminiscent of roses; a pleasure to sip that’s soothing to my stomach.

Hops is a perennial that sends out shoots in the spring that grow into stems called bines that climb, clutch, cling, and bind themselves tightly to anything nearby as a support. The leaves are dark green, and heart shaped with toothy lobed edges. Hops has both male and female flowers.

The female flowers are called strobiles and have over-lapping yellow green bracts, similar to scales, on long, oblong, rounded shapes containing a yellow powder that feels cornstarchy where the bitters live. This powder is called lupulin.

Hops loves rich, moist soil, and excellent air circulation as it is susceptible to powdery mildew. It benefits from guano and manure applied in the winter. It can bloom between June and August, depending on conditions and region, and the flowers are best picked in September when lightly golden for drying or tincturing. During hot summers, colonies of Red Spider (Tetranychus Telarius) can overindulge on sap, causing the leaves to fall off.

It can be grown from seed, though it spreads vigorously (invasively!) by runners that can be transplanted easily. Once in place, it has a long reach and will spread from its initial spot far and wide.

It is native to England, from where it was introduced to Scotland, Netherlands, Germany, and eventually spread, running all around the world.

It is said that the name Hops comes from the Anglo-Saxon ‘hoppen’ meaning to climb. Pliny explains that the botanical name, Lupulus, from the Latin ‘lupus’ meaning wolf, is a reference to how the bines climb over and strangle Osiers (Salix Viminalis) much in the way wolves strangle sheep. Willow Wolf also refers to this way of Hops embracing the Osiers, which are basket-willows of the Willow species, imitating wolves in a pasture of sheep. There is speculation that Humulus refers to ‘humus’, the soil of preference for Hops.

The leaves and flowers of Hops were used to make a brown dye.

The Romans ate the shoots in the spring, in much the same manner as we prepare asparagus. The first young leaves were blanched and eaten as a pot herb rich in anti-oxidants.

Hops may have initially been planted on farms in Kent on a large scale, beginning its garden tour more vigorously by the sixteenth century. During the reign of Henry VI, planting Hops was banned, and even after its reintroduction there was resistance to its use. Henry VIII forbade brewers to add hops and sulphur to ale, due to its reputation as “a wicked weed that would spoil the taste of the drink and endanger the people.”

By the 11th century it was cultivated in Germany, where it was used as a flavor enhancer and preservative for beer, as its anti-microbial properties fend off decomposition and extend viability when stored. Prior to the brewing of ‘bier’ (beer) by the German and Dutch people, the Saxons and Danes brewed ale (from the Scandinavian ‘ol’ meaning Viking’s drink). It was primarily fermented malt or fermented malt combined with honey, ground ivy, and assorted aromatic herbs such as marjoram, yarrow, and germander. After hops was introduced to this concoction as a preservative, it continued to be called ale and the word beer was reserved for beverages where hops was a primary ingredient rather than an additive intended to preserve a drink.

Nicholas Culpeper, in his Complete Herbal, places Hops under the dominion of that fiery planet, Mars, and it is reputed to benefit persons who store anger and are choleric in temperament.

The volatile oils have sopoforic and sedative effects, while the lupamaric acid is stomachic and tonic both improving the appetite and promoting sleep.

It has an affinity with the kidneys, acting as a balancer where there are fluid imbalances and water retention, promoting urination.

As a bitter, half a beer is said to increase digestive secretions whereas a whole beer decreases them, acting effectively on people with worn, tense, or “nervous stomach” conditions.

Nervous, Urinary, and Digestive.
Warming to the spleen, liver, and bladder.

Reduces headache and insomnia used as a strong tea in a pre-bedtime bath.

It is suited to volatile persons with strong emotions, pent up anger and hate, ambition, and mental strain leading to worry, nervous fatigue, insomnia, and tension, reflecting the intense Mars personality indicated by Culpeper.

Additionally, look for feelings rather than thoughts, where vengefulness and spite are held in the sacral and solar plexus areas (rather than the head); another indication is the tendency to derive pleasure from saying, “I told you so” even in detrimental situations that could be responded to with compassion instead. The person who is full of themselves (even if it’s hot air and gasses) benefits from the release provided by hops!

It promotes relief in the form of release when afflicted with flatulence, with more pronounced results from infusion.

Strobiles, fresh or dried as tincture or infusion; best harvested late summer through autumn or whenever the strobiles leave a powdery residue on your fingers and release a strong scent when pinched lightly.  Tincture or dry immediately.

It is said the longer they are dried, the more relaxing the medicine is to the nervous system, whereas the fresher the strobiles the more stomachic and bitter their action will be.

The infusion of dried strobiles holds more bitters, eases an irritated bladder, tonifies and is useful for jaundice, indigestion, and afflictions of stomach and liver.

The tincture improves digestion as a stomachic, and as a sedative induces sleep and soothes the over wrought brain.

Small doses for nervous anxiety, large doses for insomnia and as a sedative; though it lacks the strong pain-relieving effects of valerian. Combines well with valerian or skullcap for high strung persons also afflicted with mental struggle, tired mind, and mind related anxiety; Mercury meets Mars.