It is raining as I write. It has been raining for two days under gray skies. Early this morning a cloud of black moved as one, winged its way over tree tops to the East, caawing loudly. The creek is swollen, rushing water forcing leaves and branches from where they’re piled up thickly, white waves bouncing along over submerged rocky banks.  The Moon is in the constellation of The Archer, the Sun, Venus, and Neptune are together in that of The Waterbearer.  My thoughts meander along into the domain of Anahita.

Anahita.  Ancient Iranian Mother Goddess, all the waters of the world spring from her, the source of ever flowing Aban.  Earth Goddess of plants, fertility and wisdom.  She is mother of Mithras, Light of The World who was born of The Immaculate One, at a time when this implied born of virtue or impeccable intent, born sovereign and autonomous, having nothing to do with the sexual knowledge, experience, or the state of a woman’s hymen more so than the purity of her purpose, the pristine state of her Being.

Lady of The Beasts, Anahita is shown at Maragha in Iran riding her chariot, pulled by horses swimming through rivers and galloping over land.  She is depicted astride a Lion, with the sun, her son Mithras, forming a halo of light above her head; fiery illumination, the hot pulse of creation.  She flies through air with wings of dove and peacock, her avian familiars.  Anahita.  Elemental Goddess of The Heavens, she dresses in the pelts of Beaver. She is known as Nahid in Farsi, and is associated with both Venus and The Moon. 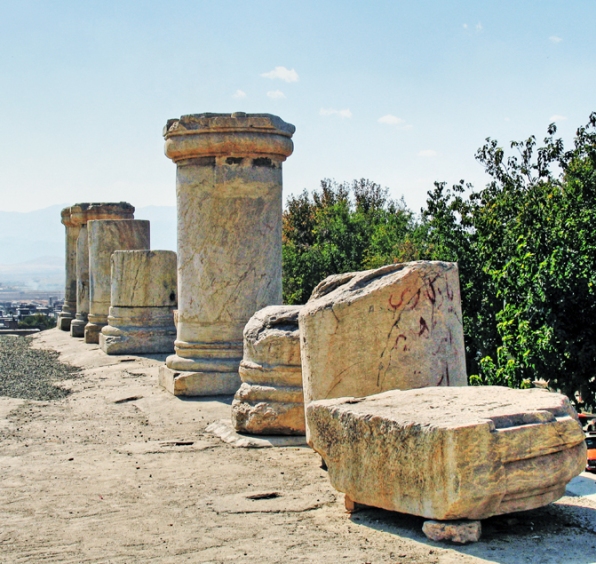 In the heart of the Zagros Mountains, outside the city of Kermanshah, is Taaq-e-Bustan, where rock carvings from the Sassanid Era show Anahita blessing Khosrow II while Ahura Mazda grants the Ring of Power to him . . . once upon a time this was how Kings were made, by the auspices of both feminine and masculine divinities, on the backs of the Knights below them.  There are such inscriptions at Naqsh-e-Rustam outside Persepolis as well, showing Anahita, the King Maker.

The ruins of her temple, built in the 400 B.C’s by Ardeshir II, live on at Kangavar, a small town between Teheran and Kermanshah, in Iran.

Once upon a time, when women married and were of child bearing age, their mothers-in-law would call them ‘Nahid’, thus bestowing upon them the blessings of fertility and wisdom by invoking Anahita to be with them during conception, pregnancy, and childbirth.  The granny women would go to the temple clad in their chadors or with scarves tied over their heads, with baskets bundled under their armpits, to pray in ceremony together.  Here they would picnic afterward on blankets spread out, enjoying cucumbers, mint, feta cheese, barbari and lavash flatbreads, and watermelon in the summer months, sipping sekanjabeen from in thermoses.

It came to pass that one day, a young woman rejected her mother-in-laws gift of naming her Nahid.  Perhaps she was ignorant of the custom, or simply headstrong, that is lost in the mists of time.  However, what is known is that she refused to be just another Nahid in a family with six already, she had her own name thank you very much!  The granny women cautioned her, warning of pride and folly, but she would not be swayed to align with their ways, so they clucked their tongues behind their chadors and dropped the subject.  When her time came to give birth, it was difficult for her to soften, to yield, to open to the experience.  The granny women said to one another behind their chadors, “What does she expect without Anahita as her guide?  She’s on her own but then that is what she wanted.”

They sat by her feet and rubbed them and prayed for the baby to come, for assistance to be given.  The doctors gave her drugs to help her with the process, while the grannies, they shook their heads, and muttered, “As if, as if . . . .” eventually they laid their hands on her belly and spoke directly to the unborn baby, singing it to come to come to come become, and the baby came after all as babies do, where these grannies, who had once upon a time been called Nahid themselves, waited beside her jubilant mother who whispered in her ear, “Little one, remember this, we women are all Anahita’s inside whatever we may be called”, even as she named her . . . . since then this tradition of naming child bearing daughters-in-law Nahid has either been forgotten in Iran, or is rarely upheld any longer, and women give birth as they have done since the beginning.

Some call upon their mothers by name when birthing, some invoke Bibi Fatimeh or her husband, Ali The Lion of Allah to give them strength and courage, some prevail upon Mary, and amongst those who remember, the name Anahita is whispered; her temple at Kangavar visited by chador clad granny women with their daughters-in-law and their baskets.

And so I write from these meanderings, on this rainy day, bringing together the artworks I’ve been immersed in painting all January, finding Anahita in them . . . at first, solitary she reaches into the spiral and finds light, diving right in from the Alborz, from the Zagros, from mountains of the heart . . . 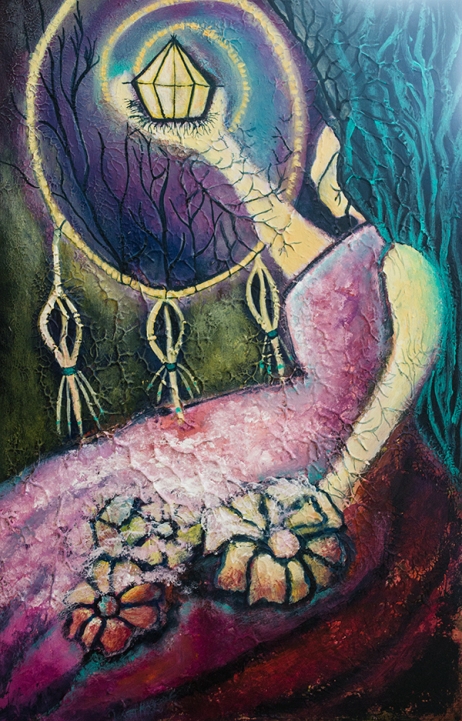 She continues onward with a companion, Mother and Child, little lanterns sparkling along the way through fields of flowers, leaving the woods to venture forth until there is fusion . . . .

Yet it is not until Wood Duck lands on the final canvas of these sessions, it is not until we paddle together on the water, it is not until after the makings of floating lanterns that I recognize what I’ve been exploring even though there are no lions, nor peacocks, doves, or horses . . . and so I end the round this rainy water rich day in word; they bubbled out from the pond, on raindrops with a fresh scent of spring.

Already I anticipate the return of Wood Duck and his mate, the robins on the hill speak of spring a coming, and it is just before that the ducks come to nest in the woods and hatch then paddle with their ducklings on the pond, where I will thank them for inspiration and being part of my journey in January, painting.

Note: All photographs other than those of my paintings are from google images.